At the ridiculous hour of 3am there sat eight Turramurra Rovers on a train bound to Wynyard. Swa, Glyn (who was very awake), Marcus (slumped on his chair), Lucy (with hair not washed for 4 days), Mark (slumped on the window), Liam (with his camera out) and Fred (nicely wet from walking in the rain). As they slowly trudged up to Martin Place, not noticing the free coffee at the station, it started to rain. The rovers helped line the barricades and had to so without moving and without feinting. This proved a difficult task for some, not helped by the perpetual rain. The Dawn Service proceeded as plan, and all the ‘Turramurraians’ survived. 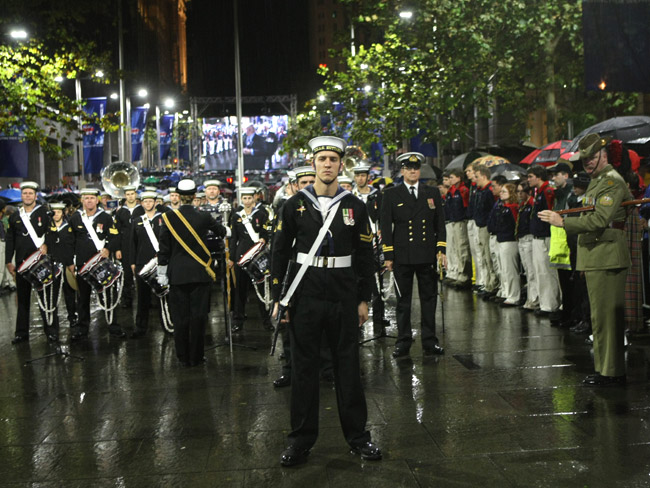 We are some of the rovers that can be seen in the picture
From News.com.au
The rovers were left to their own devices for a while before helping the Veterans of the 9th division with their wreath lay ceremony. While waiting, the rovers proved their expertise of finding and using crates… as seats. The small procession was an uplifting experience to watch as men from the 9th division marched, led by Castle Hill RLS Pipe Band, to Martin Place to lay their wreaths. Swa and Lucy held the Australian and United Kingdom flags whilst Mark and Glyn held the banner of the 9th Division.
The rovers then proceeded to get breakfast of macca’s (now that the breakfast menu had started). This meal consisted of muffins that would remind people of the monstrosities created around the BBQ at skin, Marcus being force fed by Glyn and Mark eating with a maccas bag on his head.
An unusual sight could be seen at about 8am; a tangle of Turramurra Rovers asleep on the steps of a building on Pit Street. In the scouting way these rovers were resourceful and used a newspaper for warmth. They were grumpily woken by a passing pipe band.
Refreshed from their early morning nap, the rovers got read for the upcoming march. This consisted of getting the flags, lining up, and standing where they were. It later included standing where they were, followed by standing where they were in the wind. Finally things started to move. The 9th division led by the PLC pipe band, walked up the street to stand still, where they were, in the rain and wind. Some passing rovers took this opportunity to take some more photos of the face of rovers, our very own Swa. 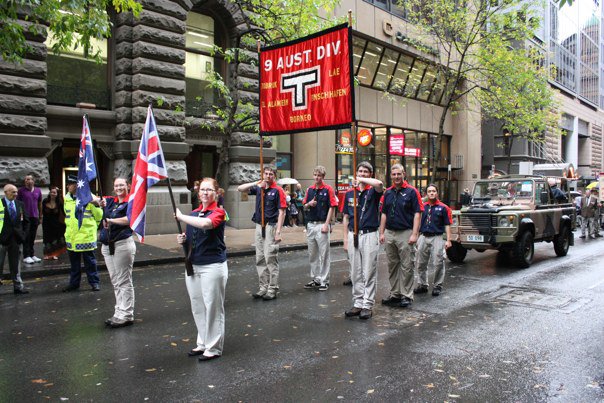 Again things moved along and the rovers led the 9th division through Martin Place and on towards George Street. The parade up George Street was an inspiring experience, to see the old, middle and young who have come to support the veterans. The face of rovers was once again seen as a huge camera loomed in front of her face.
Before they knew it, their short march was over. It is noted that the rovers did in fact march in time, and no one tripped on the horse droppings in the middle of the street.
– Fred